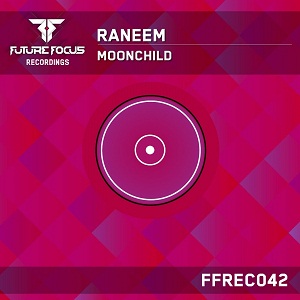 Raneem has been in the EDM scene actively since 2008, with releases on Armada, High Contrast and Spinnin’ Records.  He resides in Montreal and is the resident DJ at Circus Afterhours – one of the hottest clubs in Montreal (voted #21 in DJMag in 2011). Known for leaving a lasting impression on anyone listening to his set or dancing to his music, it’s no surprise that he is well supported by many of the big names in Trance like Armin van  Buuren, Markus Schulz, W&W, Cosmic Gate and Tiesto only to name a few.

Moonchild is Raneem’s debut single on Future Focus Recordings, a fairly new label put together by three EDM veterans (Ernesto van der Meij, Stuart Matheson and Sasha Vatoff). When I asked Raneem what inspired him to name this track Moonchild, his response back was plain and simple. He is a Cancer in the zodiac, and Moonchild is the nickname for someone born under the Cancer sign.

I’m fairly new to Raneem’s music and must admit I had no idea what to expect upon hearing this track. The second it started though, I knew it was going to be epic. Moonchild is an interesting mix that includes big room, tech trance, and euphoric trance elements. It starts off with heavy hitting bass and a build up that gets the whole body moving with no time wasted.  From the beginning you think you’re in for an intense seven minutes of hard tech trance beats, and then around the two minute mark the heavenly piano melody cues. This melody breaks the song down so beautifully and finds the intense emotion that trance lovers look for in euphoric tracks, creating an amazing atmosphere. Slowly the bass comes back up from the surface and creates excitement and build up that brings the hands up high to make a perfectly balanced track that has nothing but huge hit written all over it. This will definitely be a huge track in 2013; I suggest you do not miss it if you love Trance!

This track was released on Beatport March 4th. Support our Canadian talent and go buy this track, I promise you won’t be disappointed.