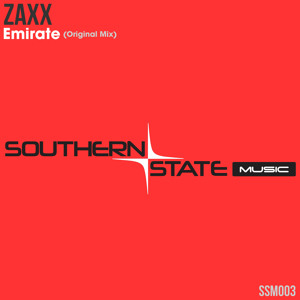 Fresh on the heels of his smash Feel Me, the South African native Zaxx returns to Southern State Music with an uplifting trance machine titled Emirate, out now. Zaxx calls the city of Johannesburg his home, and has performed on the same stage with the likes of Markus Schulz, Cosmic Gate, and Aly & Fila.

Zaxx wastes no time with this driving follow-up, securing this banger a place in the upper 50 on the coveted Beatport Trance Top 100. With a force of momentum behind it, Emirate is being given early support from top names such as Lange: “Nice uplifting vibe!”, Matt Darey: “Banging stuff!”, and Shane Halcon: “Gonna be playing this one A LOT! Great work!”

“Well I think it’s a bit obvious what inspired me on this track (laughs)! On a recent trip to Dubai, I saw this contrast in the skyline, where desert and city collide. I then set out to create something that could blur that line, that line between fantasy and reality. That is essentially what the spirit of Dubai is…a sort of fantasy arising out of the sands.” – Zaxx

Emirate is the definition of pure uplifting bliss, holding an almost spiritual energy with each and every kick.