By tranceported on November 15, 2013 INTERVIEWS 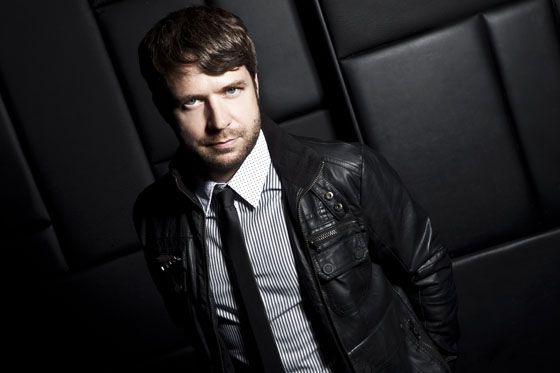 Stuart Langelaan, better known as Lange, came to Toronto on November 1st, 2013 for the first stop on his upcoming album tour We Are Lucky People.  Lange has made an impact on the trance music scene for over a decade now. Throughout the years he has evolved as a producer and become an icon in the trance community. Luckily EDMTOR’s Jennifer Kim was able to sit down with the him before his set at Toika Lounge.

J: Thank you Lange for meeting with EDMTOR today. For my first question –  your new album is named after a track from your last album. Why did you choose the title “We Are Lucky People”?

L: That title came to me when I was sitting on a plane going somewhere, I can’t remember where it was actually. I was just thinking that, “we are lucky to be doing this…it’s really exciting to be doing this every weekend”. So I decided I’d make a track called We Are Lucky People. I wrote it basically on the iPhone, “use this track title”. When it came to doing the album ,I felt writing that track was kind of  the point where I decided it’s time to do another album. It just seemed like the right time. I spent ages trying not to reuse that title because I don’t like reusing titles.

J: Toronto is the first stop of your new album tour. What can fans expect on this album tour that is different from previous ones?

L: Well, obviously there’s some new stuff to play from the album. This album is has been more of a return to kind of, real trance if you like for me, so I’m playing it more trancey perhaps. I mean everyone been getting carried away on the EDM wagon and we’re all playing kind of a lot more driving stuff. But I’m trying to put it back and make sure it’s a lot more of the nice melodies and vocals stuff. So, I say this tour is kind of a return to that sound for me.

J: For your new album what  do you think is your favourite track and why?

L: That’s a difficult one – I really don’t know which one [laughs]. – I would probably say Destination Anywhere! If I have to give a reason I would say – I just think it’s the best track musically and I find it an exciting track. I don’t know if you know the track but it tells a story in the perspective it has quite a few different sections, and that I remember having too many ideas for it actually but, I managed to get it all in one idea. It also was also inspired by my bachelor weekend as I was on a yacht called Destination Anywhere. You get ideas from different places – that track is really special to me, it’s definitely one of my favourites.

J: That’s really cool that you got the track name from an experience in your life. Do you find that the song is related to that memory?

L: Yeah, I like doing that. Like I said I jot down names, I’m sure everyone does it, jot names down on the iPhone as soon as I come up with up with an idea. I saw “Destination Anywhere” on the name of the boat on the harbour and took a photo, that’s actually the cover. It’s funny I recorded on the day – it was a 2 day yachting experience, I recorded that the sound of the harbour, like it was really bad weather the second day, howling and stuff. I recorded the sound of the harbour on my iPhone, and it’s actually on the album. It’s nice to put personal stuff in there [smiles].

J: Violin’s Revenge is such a beautiful song, but it a darker title to it. I was wondering why you came up with such a vengeful sounding name for such a melodic and beautiful trance song?

L: It was the first name that came to me really. I think, its’ just that the middle that goes kind of dark. It just seemed like the right kind of idea, that It just had this kind of… dark twist so I thought that suited it. Actually, on the album I’ve got a light mix as well which is bit different in the middle. There’s two different versions.

J: You just played at Cream in the Philippines for the Halloween Ball. Tell me something about that event, it sounded really interesting.

L: Yeah, it was really cool. It was about 3 ½ to about 4 thousand people. It’s one of the biggest ones they’ve done there for stuff in EDM, so it was really good. Tydi was playing there as well.

J: Is there a big trance following in the Philippines?

L: Yeah, it would appear so. It’s growing I think, perhaps it’s more of an EDM thing than trance thing generally. But, this was more of a trance event with a few thousand people showing up.

L: I would say that generally, in Asia, people don’t quite react as strongly. They don’t show their reaction as much as places like America or ­– in fact, in parts of Europe it’s even… a lot crazier than America with the way people get down on the dance floor, as you would. I’ve been to some events in specific places where the crowd seemed quite…really reserved, you know – aren’t really doing much, and it called me out when I first started DJing in certain countries. I was thinking, “Wow! I’m doing a really bad job!”, “What’s going on?”, then you’d read the next day “Wow! Best night of my life” [laughs]. So I think it’s just personality of some people to really keep it in.

J: So you were just spinning at Lifeline in Swindon, what was that event like?

L: That was quite a small event, quite close to where I live actually. Only an hour away from where I live. Lots of DJs, and lots of people from all over the country came to that!  I mean, It’s not traditionally a place where people DJ, but you can’t decide where there’s many trance events booked.

J: I noticed that the trance line up had a lot of harder hitting trance DJs except for yourself, did you find that it made you stand out more?

L:  I played a little earlier than I would normally actually because it was a really hard line-up. I don’t think it made me stand out more, but the set itself went down really well.

J: With that more hard hitting electro trance sound, like W&W, being more popular; do you find that you feel more pressure to play a similar sound or do you try and keep to your tradition trance roots?

L: I guess you would say you get influenced – I wouldn’t say I feel pressured, I don’t deliberately play something. I’ve always liked to play lots of various stuff anyways, to be honest. I will play hard stuff and then I’ll go back to melodic. In the end of the day I find it much more interesting to keep them on their toes a bit. –I was dabbling with the electro stuff a few years ago, and I found I kind of got bored of it… I found a lot of it sounds the same. I tried to avoid most of the commercial stuff anyways.

To read EDM TOR’s review of Lange @ Toika, click here. To view our full album of pictures from the event, click here.