Omne trium perfectum, or “everything that comes in threes is perfect” – enter “Follow Me III”. Earlier this spring Nifra graced us with a new third part to her DJ mix compilation series. Released on Coldharbour Recordings, the mix features twenty-one trance tracks heavily focusing on the family of Coldharbour-signed artists. Five of her own musical creations and/or reworks are included, presenting original songs Kepler 22B and Getaway, Resistance (NOMADsignal remix), and her remixes of Christina Novelli’s Numb and Super8 & Tab’s Eternal Sequence. Nifra is celebrating the album’s release with the Follow Me III Tour all throughout the second half of 2022. She will be broadcasting her latest mix through the speakers at clubs and festivals across the globe! Thanks to Sleepless Events and Trance Family Canada, Toronto made the shortlist being one of only six North American tour stops.


Born in Slovakia, Nikoleta Frajkorova (“Ni” and “Fra”) demonstrated fierce determination to dominate the industry since her teenage years. Her early success was noticed by trance DJ/producer Markus Schulz, founder of Coldharbour Recordings. Ready was her debut track on the label. The 2008 release was wholeheartedly affirmed by the Global DJ Broadcast listeners, fellow leaders in the industry, and the international trance family. Her rise to success continued, playing to crowds on some of the biggest stages in the world such as Transmission in Bratislava and A State Of Trance in Den Bosch. In 2014 Nifra was officially signed to Schulz Music Group (SMG). She is without a doubt one of the leading female figures representing the dance music scene due to her powerful trance melodies and driven personality –  in 2019, Nifra was nominated for Best Female Trance Artist at the International Dance Music Awards (IDMA).

Nifra brings her Follow Me III Tour to Toronto on August 19th 2022 inside Bar Cathedral. Tickets are $30 plus fees and are available here. A few lucky fans have the option to purchase VIP Meet & Greet tickets – for $100 plus fees, you get admission to the show, an autographed CD, an autographed poster, and a photograph with Nifra. Check out the official Facebook Events page for any latest updates. 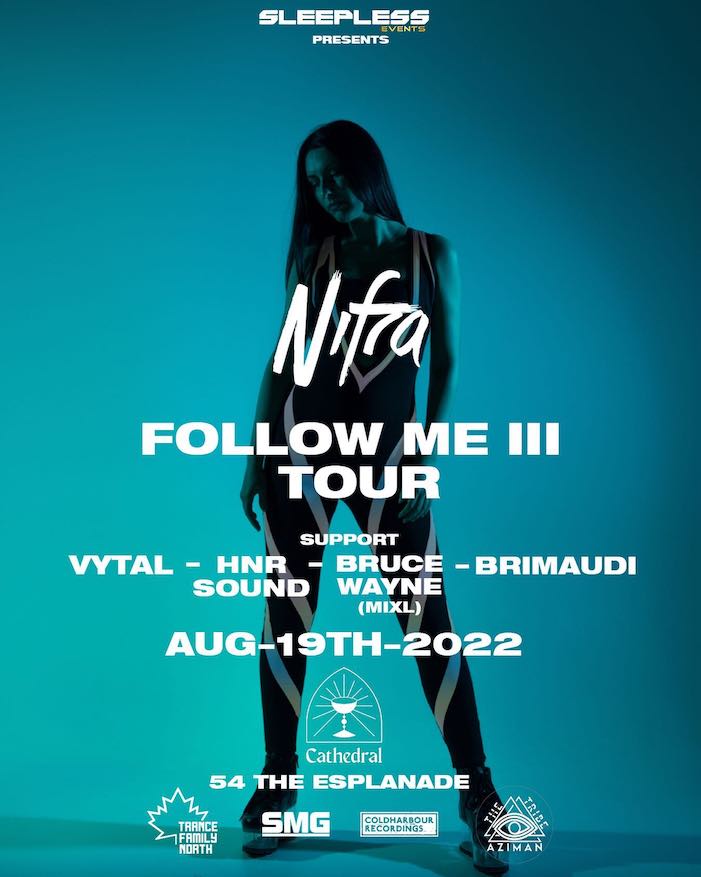