Toronto has awakened after a long unwanted slumber. The city is buzzing with activity to make up for lost time. The summer of 2022 has welcomed back a slew of events and attractions including the return of music festivals and club nights. Since the comeback, Sleepless Events has been one of the top promoters in Toronto to book trance DJs. Sleepless Events locked in Nifra as part of her Follow Me III Tour, being one of only two Canadian dates of a total seven North American stops.

The evening air was pleasantly warm as I headed down to the venue late night Friday, August 19th. The show was booked at Bar Cathedral (originally moved from Geary Warehouse) and this would be my first time checking out the place which is tucked in and connected to The Old Spaghetti Factory. Out front is unsuspecting and painted all black. Coloured lights flash through the paned window as the music thumps from inside. A pointed arched overhang with a glowing red light signals the entrance. Security and the hostess with the wristbands were both easy going and I was on the dance floor within minutes. Hnrsound were on deck prior to midnight, warming up the crowd for our headliner. At first glance around the room – the space is intimate and the decor is fully in theme with the name “cathedral”. Big stained glass arches cover the entire back wall, stained glass art run across the top of the bar, and stained glass panes cover half the right wall where a few lounge chairs and tables are. There is a giant stained glass dome in the centre of the ceiling that I assume is a light. The rest of the walls are dark wood and are covered in various sized ornately framed mirrors or Christianity-inspired artwork and decorations. Because the room is small and full of glass, it doesn’t take much power from the multiple lighting rigs to illuminate the whole space. The DJ booth is at the front of the room and is elevated a couple of steps above the dance floor. There was a screen behind the booth which appeared blank. After taking in my surroundings, I immediately walked up to the bar on the left side of the room and ordered a drink and water. To my surprise, the bartender’s default reaction is to fill a glass, not hand me an overpriced plastic water bottle ($4)! Mixed drinks came up to $7.90 (and coincidentally a few dimes were spotted on the floor throughout the night). 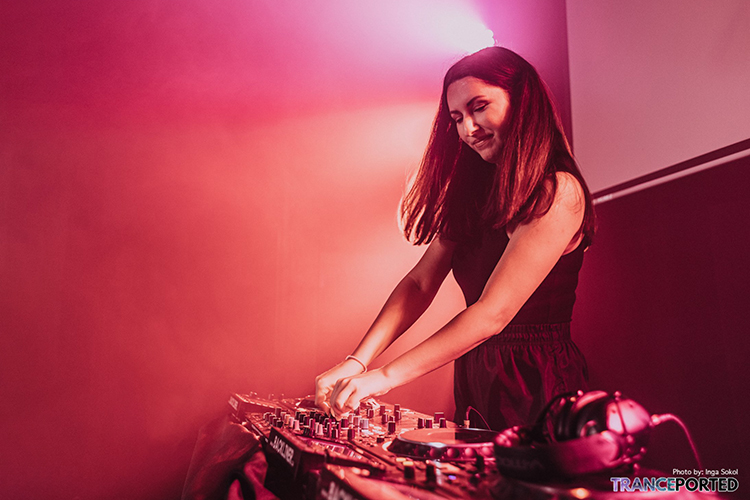 Nifra started her set at 12 pm. Her energetic stage presence is immediately evident as she jumps around and feels the beat along with us. The crowd was now at its peak attendance and evenly filled out the room. There was always a comfortable amount of personal space to dance freely in. Nifra’s Follow Me III Tour is in promotion of “Follow Me III” – the latest instalment of her compilation album series. As with any promotional tour tied to an album drop, listening to the featured release perceptibly gave a preview of the night’s setlist. “Follow Me III” predominantly features Coldharbour Recordings artists and the label’s distinguishable self-described “dark, deep and moody” progressive trance sounds. Many tracks featured on “Follow Me III” were highlighted throughout her two-hour set, including Fisherman’s Enterprise, Norni’s Dark Star, GXD & James Christian ft. Scar’s Connect, and obviously music created by the guest of honour herself, Nifra’s originals Resistance and Getaway, and her remix of Christina Novelli’s Numb.

The high-energy melodic breakdown in Enterprise was a crowd favourite as the dancing noticeably intensified. I’m sure our enthusiastic response to this particular track makes her extra proud to be a part of because this is an original creation of Isaac Vissers (better known as Fisherman, also known as her boyfriend)! According to the users who contribute to 1001tracklists.com, the first recorded time Enterprise was dropped live was by Nifra herself in summer of ‘21 while DJing in her home country of Slovakia. It hit global reach when it was aired on Markus Schulz’s Global DJ Broadcast World Tour a few months later (it was featured on Nifra’s guest contribution of the episode). Ever since then, the two of them have been including the track in their DJ sets and radio shows. From March until now, Enterprise was exclusively featured only on his girlfriend’s compilation mix – it was only officially released this weekend! The absolute brag of being a trance power duo! Nifra & Fisherman – “individually strong, together unstoppable” – are going b2b for an epic 9-hour open-to-close set next month and here’s trusting the likelihood of a set recording getting uploaded online subsequently. The couple welcomed a little baby boy, Mylo Ace, to the trance family a little over a year ago. I hope to see him as part of the new generation of Coldharbour Recordings in time! Lucky for us, his parents have not shown any signs of slowing down since his arrival! 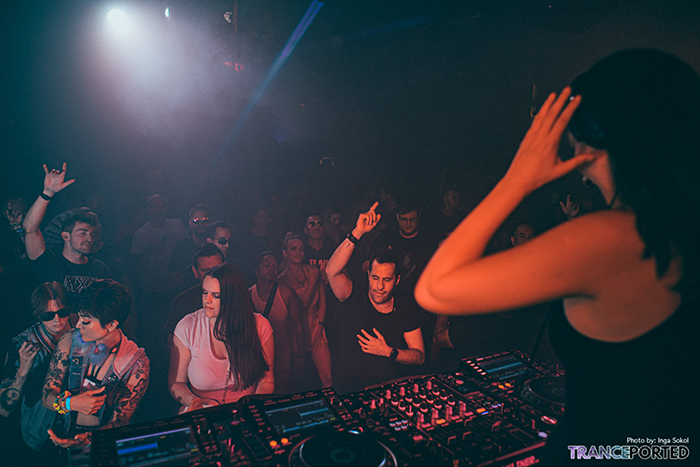 Another big track that delivered a resurgence of energy to the night was when Nifra played Resistance. She opted for her original release (which was featured on “Follow Me II”) rather than the euphoric-techno remix by NOMADsignal featured on “Follow Me III”. Around 1 am (halfway into her set) the popping eighth notes of Resistance’s driving melody captivated the room – everyone’s hands were up in the air, tapping their fingers to the beat as if they were tinkling along on invisible piano keyboards suspended above their heads. Nifra, too, had her arms out for the build up and the entire room bounced along when the beat dropped. I’m not sure when it happened, but it was now I noticed the screen behind her was illuminated and a simple logo graphic played on loop. The hard-driving beats continued and a few tracks later, I realized how sweaty I had become. In this moment the lack of airflow became extremely obvious. The only streams of air came from the smoke cannons blasting periodically all night – not sufficient enough to cool down a room full of warm bodies. A break was needed from the current wave of hitting tech-trance sounds and I took the opportunity to check out the washrooms. Now, this was bizarre. The door at the back of the room led directly into the campy carnival-themed “The Old Spaghetti Factory”. A staff member was stationed there directing ravers to the restaurant’s restrooms. I peeked my head around the corner into another room where guests were enjoying their meals and late-night cocktails. Hey, they should’ve come join the party! 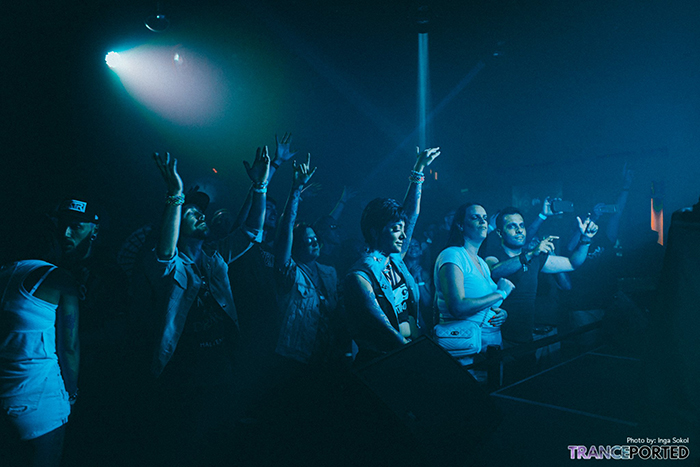 A personal highlight of mine was hearing GODD pound through the speakers and aggressively moving to this new remix I hadn’t heard before. I was very surprised to later discover that this was Hardwell’s rendition of the Marco V classic. All night, Shazam failed me miserably. I’m not sure if the speakers were too loud and blew out my phone’s mic, but it couldn’t recognize even the popular tracks. Shout out to Dave and the Tranceported team for helping me identify clips and contribute to the night’s setlist! We know there were at least two unknown and unreleased IDs previewed! In fact, Nifra closed her set with one of them  – a lovely vocal trance melody featuring the easily identifiable voice of Susana. Keep an eye out for this release. 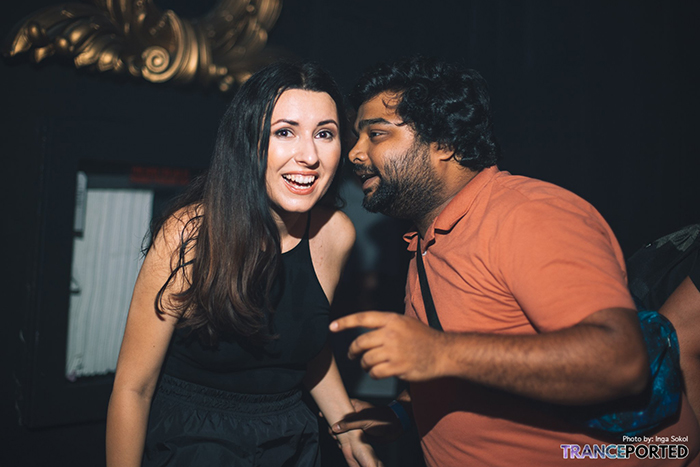 The crowd clapped and hollered for Nifra as the final notes of her set rang through the speakers. The room barely thinned compared to when she started, meaning her loyal fans stayed with her the entire journey. It was 2 am when she left the stage and Bruce Wayne took over the decks. A lucky few were able to meet Nifra and snap some photos with her after the show. Bruce Wayne (a new alias of MIXL, w Floridaho is a mashup trance DJ from) kicked off his set hard with some psytrance cranking the BPM way up. He dabbled across the genres with his samples and mixing, including a lot of sing-alongs to songs like Everytime We Touch, Castles In The Sky, Move Along, and Sweet Dreams. The numbers on the dance floor noticeably dwindled down during the first twenty minutes. Those that left missed out on Jason Ross’ Atlas, an Anjunabeats track that is one of my favourites. It was entirely unexpected but I was completely thrilled! About three dozen or so stayed to the end of Bruce Wayne’s set. Brimaudi had the final hour slot starting at 3 am, but with less than a dozen remaining, I called it a night. Thank you Sleepless Events – until next time! Click here to check out the rest of the photos of the night.