On June 17th & 18th 2022, Electric Escape presents the long-awaited return of U4RIA Trance Festival! It has been four years since Canada’s first all-trance festival graced the Toronto Events Centre back in June of 2018. This year, they have switched up the party’s venue. The inaugural pool-side patio theme was restyled to open grassy fields at the massive Markham Fairgrounds Complex. Since the final phase announcement, there has been another location change. Due to unpredictable weather, Electric Escape made the judgement call of moving the party inside to MFG Complex Hall 4. The 8,000 sq. ft space will be transformed into a dance floor for the two-day event. The capacity is limited at 1,000 guests; if you have not purchased your ticket yet, secure your spot now!

Ashley Wallbridge, 34, from England. Wallbridge is one of four headlining DJs who performed at the first U4RIA Trance Festival four years ago. Electric Escape booked him for a special “FOURPLAY” 4-hour extended set back in January 2020, a night made even more remarkable now knowing he would be one of the last club nights before the worldwide pandemic. He guest-starred on EE’s U4RIA Trance Livestream 3.0 in July 2020 and made his in-person return to Toronto in November 2021.


Ben Gold, 27, from England. This will be his U4RIA branded debut! He played in London, ON in March of 2022, but it’s been more than 5 years since we saw him in Toronto for Armin van Buuren‘s ASOT 750 celebration at Exhibition Place.
Ben Nicky, 36, from England. Nicky played at Electric Escape’s second-ever event Escape Together: A Journey Into Trance way back in 2016. He returned to Toronto twice in 2017; in May at True North Music Festival and in December inside Nest. He was booked once more for March 2020, but a sick global twist of fate would force cancellation.
Ferry Tayle, 40, from France. He was part of EE’s debut event Escape 138: A Journey Into Trance in August 2016 (inside what was once The Sound Academy) and the debut U4RIA Trance Festival in 2018 – two performances that contributed to those dance parties’ mega success! He guest-starred on back-to-back U4RIA Trance Livestreams 9.0 & 10.0.
Genix, 38, from the United Kingdom. He played his first U4RIA club night in March 2019 and returned less than a year later in January 2020 as part of the Anjunabeats Worldwide 09 Tour. Genix was scheduled to celebrate his “199X” album release in December 2021 but was unfortunately cancelled due to a resurging wave of the virus.
Jeffrey Sutorius, 42, from the Netherlands. He made his U4RIA debut seven months ago at Nest; one of the first shows back after the last wave of pandemic-related delays and cancellations.
Mark Sherry, 47, from Scotland. Out of everyone on the festival lineup, Sherry is the international DJ who holds the most Electric Escape bookings, with fix under his belt: Escape 138 in August 2016, a celebratory show for Outburst 500 in April 2017, U4RIA Trance Festival the following year, an open-to-close set for the release of “Confirm Humanity” in October 2019, and most recently U4RIA Trance Livestream 11.0 (and released as Outburst Radioshow #606) in June 2021.
Mark Sixma, 39, from the Netherlands. Another recurring booking from Electric Escape with three Toronto appearances: in 2018 he did a “Sixma to M6” extended set, and in 2019 he returned twice, in January and November.
Miyuki, from the United States of America. The only female DJ on the line up! She made an appearance on U4RIA Trance Livestream 12.0 earlier this year in March.
Somna, from Canada. Somna has made a few appearances with Electric Escape throughout the years: the AVA Recordings 10 Year Anniversary and True North Music Festival in February and May 2017 respectively, the epic U4RIA Trance Festival in 2018, and most recently in November 2021 alongside Ashley Wallbridge.
Our supporting talents are widely known local acts. A.D. The Kid and Martnello have made countless appearances at Electric Escape events, both in the clubs and through their U4RIA Trance Livestreams. A.D. The Kid and Karl K-Otik were at the first U4RIA Trance Festival on the Canadian Heroes Stage. Karl and Aaron Winter have both participated in U4RIA Trance Livestreams. 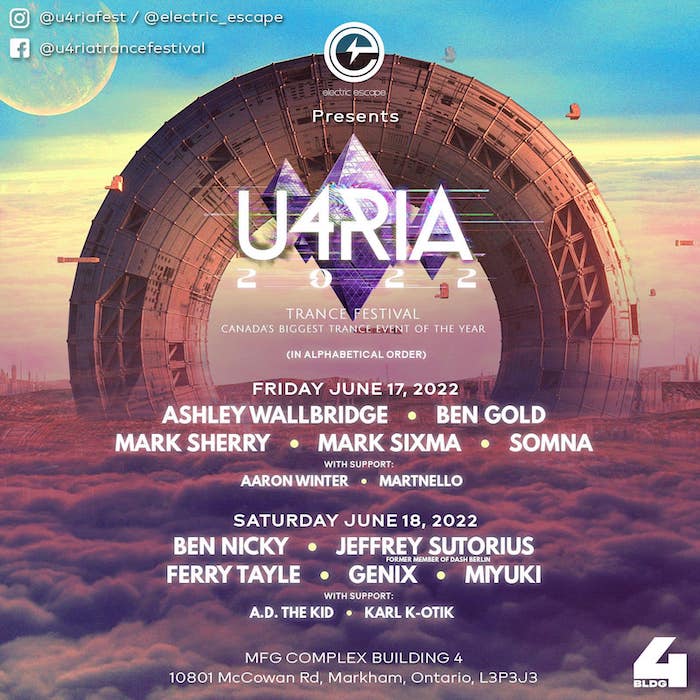 Day passes are now available for purchase – Friday admission is $45 plus fees and Saturday admission is $65 plus fees. You can purchase single- or two- day tickets here. Any last minute announcements will be made on the official Facebook Event page.