I could already hear the familiar faint echoes of psytrance bass from a street away as I arrived for Psychedelic Babylon’s Spring Awakening event. DJ Wolf was starting things up behind the decks while early comers checked coats and laid early claim to the front of stage space. The venue at Regent Street was only announced 24 hours before the event, which I was initially anxious about, but the place turned out to be spacious and clean, decorated with UV-reactive art pieces, including a large eye-catching tapestry positioned behind the stage. DJ Wolf kept up a steady build with a style that combined psytrance elements with techno undertones as the crowd began to trickle in. Cheers of appreciation and anticipation marked the first transition as DJ Wolf handed off the decks. 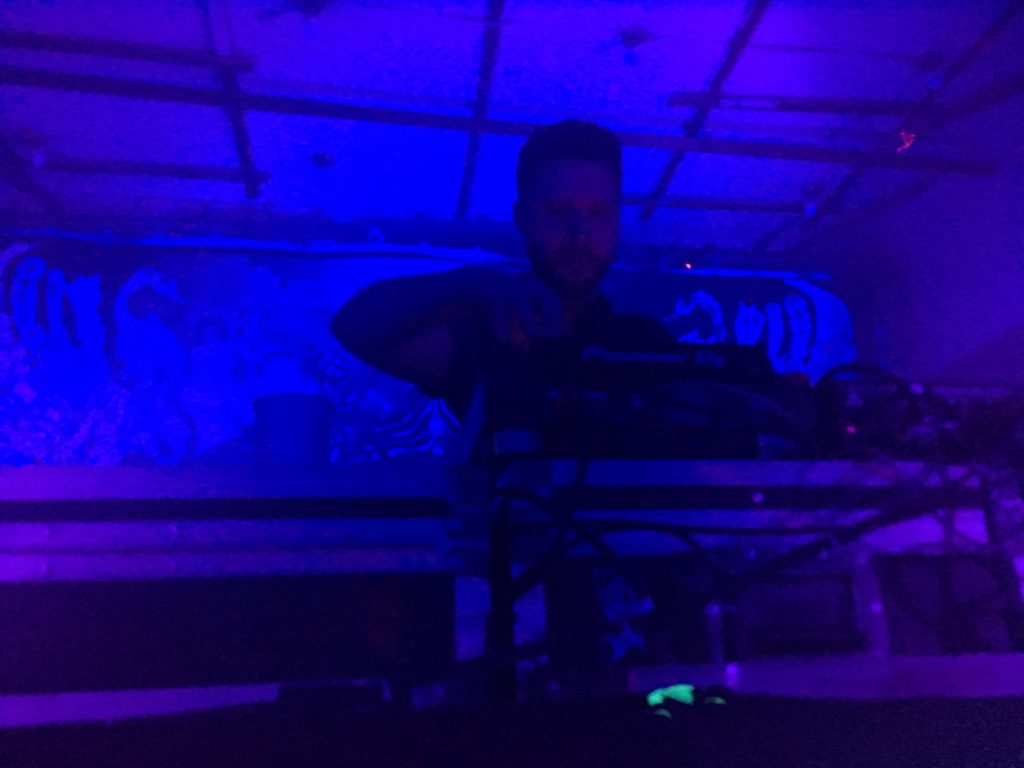 Kawabanga was clearly determined to shake off the winter blues and quickly turned things up a notch. Tracks like Sonic Masala by Zentura and a remix of Blastoff to Kicksville had everyone’s feet moving, drawing all comers to the dancefloor. While his individual style is still evolving, Kawabanga is tuned in to his audience and has learned what the locals like. As he raised the BPM, and the house energy with it, I knew I was in for a great night of inspiring psytrance.


By the time Protocell took control of the decks, the venue had filled up and the energy radiating from the dancefloor clearly demonstrated the love Toronto holds for this spectacular Montreal duo. Their response was loud and clear – there was no holding back tonight! While I had experienced Protocell’s amazing sound before, that previous performance had only featured one of the pair of founding artists. This time, with both partners present, the synergy electrified their set and highlighted their creative chemistry. Protocell deftly showed off their skills with a killer set that blended harder elements of progressive psytrance with the more psychedelic sounds of full on – a trademark of their signature style. Combining technique and talent with solid track selection, Protocell maintained the building energy, priming the crowd for the night’s headlining act.
The air was positively charged with intensity as the man we’d all been waiting for finally put his hands to the decks. Sonic Species of (UK) Nanorecords kicked things off with Party On, a collaborative effort with Mechanica, GMS, and Stryker, which set the mood perfectly for the rest of the night. Not a foot was still as Sonic Species navigated every DJ’s greatest challenge – keeping the dancefloor on fire without burning out the crowd – with expert skill. Dropping favourites like Just Another Freak and Tweakers, he had a way of guiding the psychedelic journey without exhausting mind or body. While the entire set was intense, the structure was dynamic enough to keep the energy high without losing momentum during those refreshing drops. I also heard Instinct byArcadia & Stryker and The First and the Last as the Toronto psyfamily and I danced our hearts out and cheered just as wildly when the master finally handed off the decks to the night’s final maestro.
An international headliner like Sonic Species is a tough act to follow but Subject 25 immediately stepped up to the challenge! Coasting on the crowd’s energy, he opened with Space Tribe‘s fantastic Into the 4th Dimension  and followed that up with Meltdown by Tristan. Although the crowd thinned a little following last call and the headlining set, Subject 25’s excellent track selection and smooth flow kept much of the crowd past their usual expiry point – dancing away to Another Dimension by Avalon, Beyond Destiny by Koi Boi, and more. Those true psyfans who stayed until the end were treated to an awesome final set and could not stop moving until the very last beat! If you weren’t able to make it out on Saturday, be sure to check out the recording of Subject 25’s closing set for Spring Awakening below to experience a piece of this phenomenal night for yourself!
As I said my goodbyes and headed out into the night, I was exhausted but invigorated. Once again, Psychedelic Babylon has brought together some of the best local and international talent for the Toronto Psytrance family to enjoy. Now that spring has arrived in the Six, I’m looking forward to hitting the dancefloor again soon – there are some great events lined up for the coming months, so be sure to keep an eye on the site for more news and updates! LINKS:

Jade is an editor and writer at Tranceported. She moved to Toronto in 2015 and dove head first into the city’s rave scene. Drawn most strongly to trance, psytrance, and happy hardcore genres, she can be found on the dance floor at least once or twice a week in different venues across the city. When not playing with words on a computer or burning up a dance floor, she likes the outdoors, LARP, attending conventions and playing with her dog and cat.