It’s been 6 months since I packed up my things and drove 3500km across the country and on to new horizons. Within the first two weeks of my arrival, I had the pleasure of lacing up my dancing shoes (the first time in well over a year) for an incredible night of Anjuna feels with Spencer Brown. Shortly thereafter, the pandemic took its toll and leaving in its wake a winter-long drought – an all-too-familiar void echoing through Trance Families across the country. Cancelled. Postponed. Rescheduled.

Winter has now passed, and the renewal of spring has brought trance back to Calgary! Bookings are popping up as far as the eye can see and I am beyond thrilled to be right in the center of it all – on the dance floor, exactly where I belong.

The newly-renovated space occupying the lower level of Junction seems to be the new home of trance events in the city, and it really is everything I could want from a space of that size. It’s an intimate venue with a crisp, clear sound system and plenty of cozy seating surrounding the dance floor. It’s properly accessorized with lights, lasers, a DJ booth panelled with video screens and, most importantly, UV lights to make sure I glow in the dark. It had been less than a week since my first experience here (for the John O’Callaghan show that wasn’t) and I was welcomed back into the open arms of Above & Beyond’s Home, singing along quietly to myself as I descended the stairs. Even though it was quite early, there already was a group occupying the dancefloor to support local DJ & producer Kaeder who had the honour of setting the tone for the night. Despite maintaining a consistent deep house bpm range he was able to steadily build the energy in the room with subtle key shifts and ace track selection. He even threw in some reworks and trance classics that (naturally) piqued my intrigue, such as Sean Finn and No Hope’s Greece 2000 update and Kryder’s remix of York’s On The Beach. Opening the night is no small task. The ability to work within tight constraints at a low bpm range while still managing to steadily build energy within the room is the mark of a skilled professional. The local talent in Calgary continues to impress me. 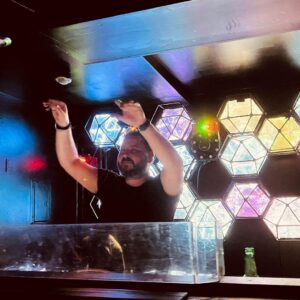 As the night went on, Anjunabeats logo-clad ravers continuously streamed into the club. I felt a bit like I was crashing a family reunion – hugs and smiles abound. There was an air of pure joy in the room. Heightened by blissful tracks like Michael Cassette’s Zeppelin and energized vocal tracks such as Kasablanca’s Immunity, the crowd felt ready despite being hours from the headlining set. You might think to yourself, “these ravers are gonna burn themselves out”. And you would be wrong.  We are only just getting started. Although maintaining that steady 124 bpm rhythm, I could feel the energy in the set begin to swell, signalling the hand-off to Fuzion Entertainment boss, Bochan. The transition was so smooth I barely noticed until the realization hit that we had begun our descent down the techno rabbit hole. While techno is not always my cup of tea, the progression felt so natural and so right. As the deep house beats got deeper, I began to hear those signature techno claps and dark, reverb-heavy basslines. While my techno ID skills are less than impressive, I found myself intrigued by the soundscapes of tracks like Bart Skils’ Tropical Heat. It wasn’t long before his influence was felt again on the dance floor, this time teaming up with Drumcode founder Adam Beyer. Their collaboration, Your Mind, was heard everywhere in 2018. Did you know that the vocal melody originated in a 1972 krautrock track by the band Can, entitled Vitamin C? Fun fact! This track slaps and absolutely destroyed the dance floor.

Bochan’s mastery of the decks managed to pique my interest in techno, which is no small task, tossing in vocal tracks at exactly the right times to maintain that upward trajectory of energy. It was my first time hearing the freshly-pressed Escape released by Kx5 – a team-up between Kaskade and Canadian dance icon, Deadmau5. It’s a track I’m sure we will be hearing much more of over the summer. I was also excited to hear the return to Markus Schulz’s Dakota project with his March release, Manray, as we began to close in on our headliner.

By the time Sunny Lax hit the stage, the crowd was fully primed and ready to go. He dove straight into some absolute gem IDs that I cannot wait to hear again. I am not proud of the number of hours I spent scouring Youtube and Soundcloud for another taste of that magic only to come up empty-handed. Early in the set, I was surprised and thrilled to be treated to a flashback of my first week in Calgary with Windows ’95 on Acid – a track that I had a very special moment with when Spencer Brown was behind the decks at Commonwealth back in October. This was one of the few deviations from a majority producer set highlighting some of the best and brightest tracks from the Sunny Lax catalogue. It was clear by the look on his face that he was in love with what he was giving us, and the crowd ate up every second of it. I can’t remember the last time I’ve seen a crowd with so much energy and so much joy. I was deep in the thick of it side-by-side with my new Anjuna family. We sang, we danced, and we experienced euphoria together. It was almost as if time stood still for a brief interval.

The beats were relentless as the night went on. The vibrations of the bass through the floor electrified my entire body, and when the drops hit, the crowd was pure mayhem. The dreamy breakdown of Mother had us all reaching for the sky until the punchy kicks of Jason Ross’ Cairo hit bringing us straight back down to Earth. The juxtaposition of Cairo vs. Luminary’s Amsterdam was a stroke of Above & Beyond’s genius and a welcome deviation from an absolutely masterful producer’s set. As we dove back in, we were treated to a few of Sunny Lax’s skillfully-crafted lockdown releases such as 2020’s Reptile, 2021’s Praimfaya, and his top-charting Beatport release V.I.B.E. Under the UV lights, the hearts of Anjuna devotees glowed like a thousand suns as the melody of Above & Beyond’s Sun In Your Eyes swirled through the air. What I love about Sunny Lax’s remix of this track is how it maintains that essence of fantasy while giving it the proper dance floor treatment with driving rhythm and impactful kicks. No one was ready for the night to end and we begged for more. He obliged with Oceanlab vs. Gareth Emery – On A Good Day (Metropolis). Everyone in that venue knew that this was a gift and treasured every last beat of that last 2 minutes and 56 seconds.

Despite Calgary’s reputation as a mecca for cowboy culture, the trance scene is alive and well thanks to Fuzion Entertainment and the dedication of Calgary’s ravers and local talent. While we may not be as big as Toronto or Vancouver, the amount of energy, enthusiasm, and love in that little club on Friday night could fill a stadium!

Catch Fuzion Entertainment’s next incredible booking with Solarstone gracing the stage at 9910 in Edmonton on May 6th 2022.

Music has always been a huge part of Anna’s life. She was introduced to Trance at a young age while on vacation in Europe, however, it wasn’t accessible back home in small-town Ontario. When she finally found Trance again she made an immediate deep connection that changed her life forever. She spends her spare time travelling around the world, meeting incredible new people, and sharing her love of Trance with the world through writing.